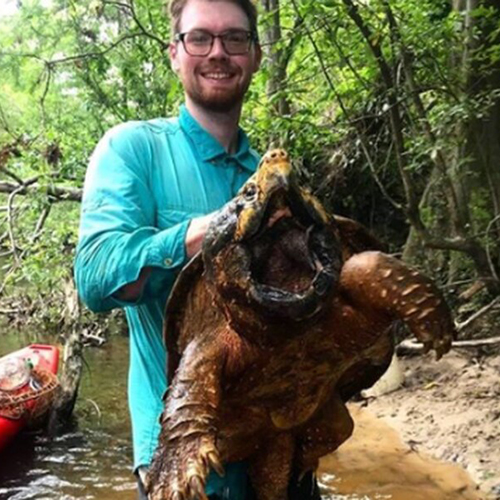 A few days ago I spent one of the fastest hours of my life chatting with Luke Pearson, a young doctoral candidate who’s spent four years in the swamps of Mississippi, studying Macrochelys temminckii, commonly known as the Alligator Snapping Turtle.

In the photo, Luke is handling the largest AST he’s seen in all those years: a bruiser that weighed in at 146.6 pounds!

These prehistoric-looking swamp monsters are protected to various degrees in various states, but—as is the case with umpteen species of turtles, especially in the southeastern U.S.—they are prized as exotic pets, particularly in China.

According to Luke, “A poacher here can wholesale an adult AST for around three thousand dollars to a Chinese broker. That broker can then sell the turtle for the equivalent of ten thousand dollars.”

How is it done? Unfortunately, turtles in general are so hardy that they’re fairly easy to smuggle. In the case of ASTs, they’re typically thrown into oyster sacks, then packed into a wooden crate. Lucas said that recently a pair of poachers from L.A. caught and shipped five hundred ASTs to China that way. While a substantial number do perish, the profit margins are so high that the mortality rate is simply a cost of doing business.

In addition, there are numerous captive breeding farms in the south, especially in Louisiana, where all manner of wild turtle species are “laundered”—presented as captive born and bred—and therefore are legal to ship to China.

Sneak Preview: In the third installment of the Nick Tanner series, I believe we’ll find Nick up to his neck in gator-infested swampland and murderous turtle smugglers. Stay tuned!

← Previous post: Otter Tracking Next post: COLLOSSAL GALL →
We use cookies to ensure that we give you the best experience on our website. If you continue to use this site we will assume that you are happy with it.OK