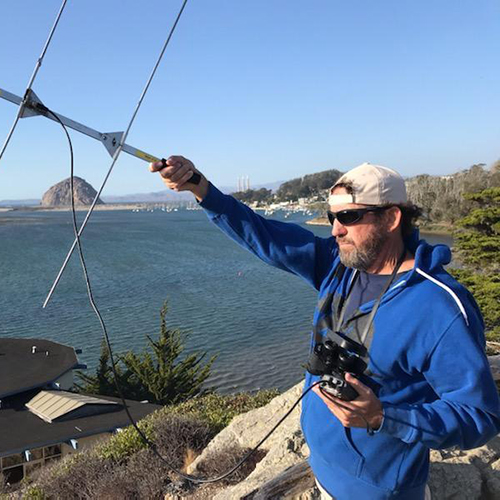 As a volunteer with The Marine Mammal Center’s Morro Bay facility, my hands-down favorite critter is the Southern (aka California) sea otter.

Since then, the population has built back up and the sea otters now occupy about two-thirds of their former range. But their numbers have plateaued, so they remain an endangered species. Algal blooms due to the warming ocean have triggered more cases of domoic acid poisoning. The same warming has impacted their primary food sources, such as urchins and crustaceans.

So, what am I doing in the photo? No, I’m not searching for a better HBO signal.

When we do otter rescues, they are rehabbed through an amazingly complex process up at the Monterey Bay Aquarium. Because they are territorial, they have to be released where we found them. They are outfitted with transmitters so their movement and recovery can be tracked. I’m up on a hill overlooking Morro Bay, tracking one of four recent releases.

Sometime in the future, it seems inevitable that Nick Tanner will be involved in some marine mammal issues along the Central Coast of California. 😊